On 18 February 1916, at the age of 27 years and 8 months John enlisted in the Australian Imperial Force at Colac . He advised on his enlistment form that his occupation was "Laborer", that he did not have a trade and was not married. At that time he was described as 5 feet 8 inches tall, weighing 192 pounds with an expanded chest measurement of 44 inches. He was assigned Regimental Number 2225 and transferred to the 45th Battalion.

John's army service history records that he departed Sydney on board the Wiltshire on 22 August 1916 and arrived in Plymouth on 13 October 1916. On 2 January 1917, he departed Folkstone on board the Princess Henrietta headed for France. John was on the battlefields in France  from 3 February 1917, he was medically evacuated to England suffering from 'trench feet'. He was granted furlo in England in April 1917, then returned to France and rejoined his unit on 27 July 1917. He remained on the French front until he was wounded on 29 March 1918. John was evacuated to the 18th General Field Hospital on 7 April, embarked for England on board the H.S. Princess Elizabeth on 13 April and was admitted to the Reading War Hospital on 15 April 1918.

John must have made some recovery from his wounds, as he was granted furlo from 21 May to 4 June 1918. During this furlo he travelled to Ireland, presumably to meet his father's family in the Upperchurch area of County Tipperary. John's condition deteriorated while in Ireland and he was admitted to the King George 5th Hospital in Dublin on 15 June 1918 in a condition described as "dangerously ill". John died in hospital on 19 June 1918, his cause of death was listed as pneumonia.

John must have had some success in tracking down his Irish relatives, because his first cousin, James Cahill sought and was granted permission to have John buried in the Glenkeen Old Cemetery near Borrisoleigh. This is the family cemetery for the  Kinnane/Quinane's from Upperchurch. 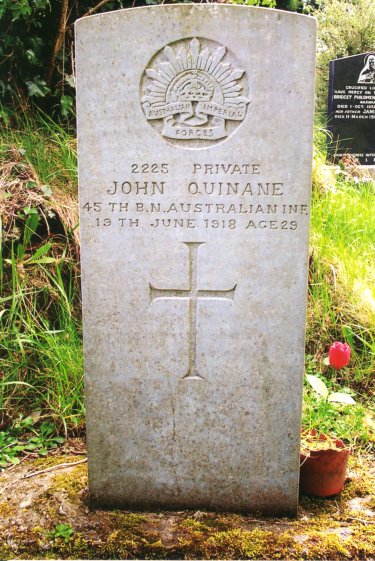 John's grave in Ireland is maintained by the Commonwealth War Graves Commission.

NOTE: Patrick Joseph Quinane (born 6/1/1894 and grandson of the original Patrick Quinane who emigrated to Australia) also served in World War I and was wounded at Gallipoli. On 7 May 1918, Patrick upon hearing that John Quinane was wounded, wrote to the army seeking details of John's condition. Patrick received the following reply to his enquiry and forwarded this letter to John's relatives. This letter is important because while we know that the original Michael and Daniel who emigrated were brothers, we do not know their relationship with the original Patrick who emigrated. The letter demonstrates that the various members of the different Quinane families of Australia were aware of and were communicating with each other at the time of the war. 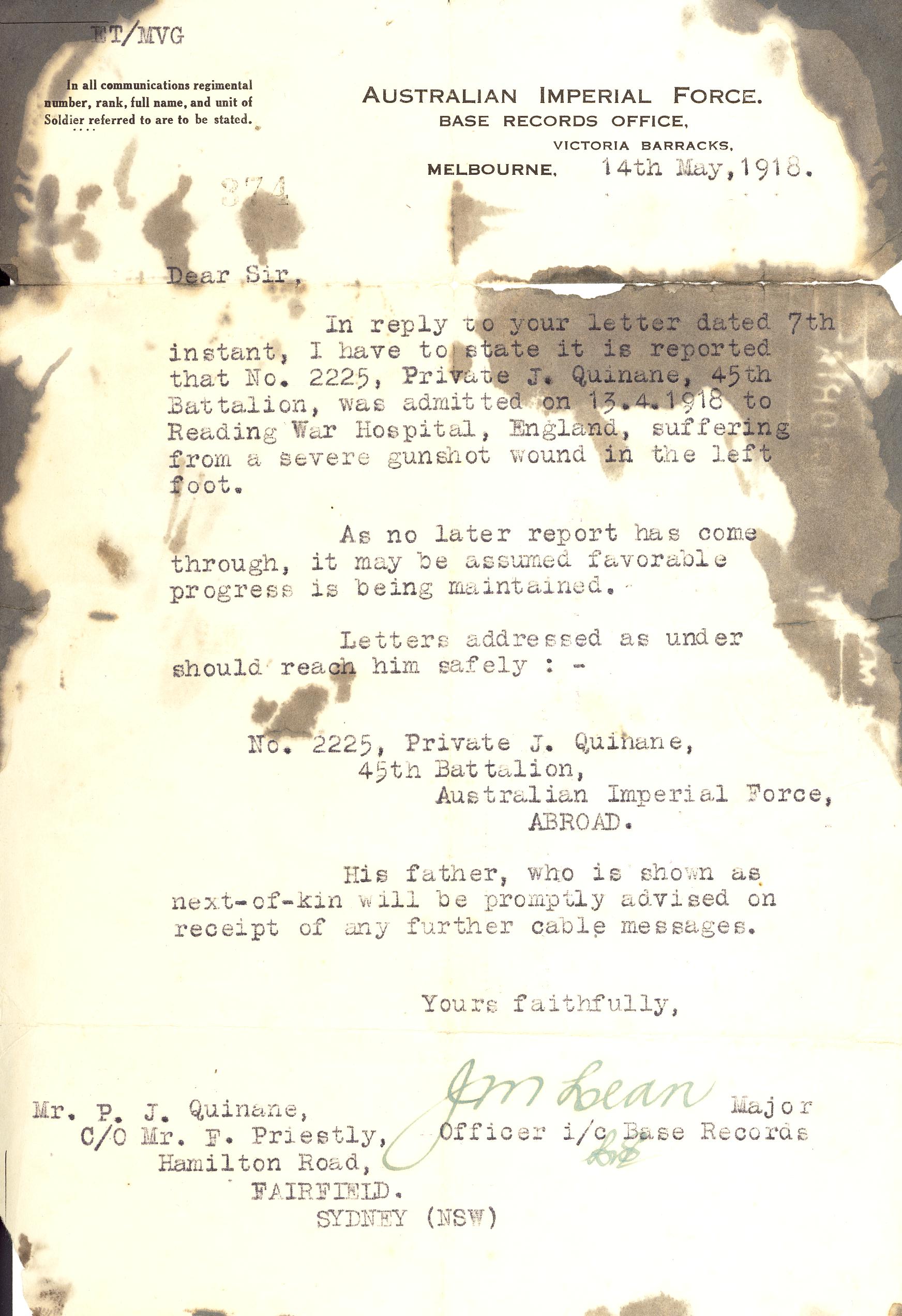 On 30 April 2005, I received an email from Serg Zaccaria, an Environmental Science student who was doing some work at the lakes of the Colac district. While walking on the shores of Lake Beeac looking  for evidence of small water animals, Serg noticed a blackened circular shape in the almost black sand.

He picked the object up and took it home with him. After he cleaned it up, he realised that it was a World War I service medal, bearing the inscription "2225 Pte J Quinane 45-34 AIF".

Serg did a search on the internet, found this web page and emailed me advising that he had found Pte John's British War Medal and offered to return it to the family.

I put Serg in contact with Frank Quinane, Pte John's nephew, they arranged to meet and Serg returned the medal he had found. Frank and Pte John's surviving family were unaware  that the medal existed and had no idea how it might have ended up in Lake Beeac - although Frank owns land on the shores of Lake Beeac where the medal was found. This property was originally owned by Frank's grandfather and Pte John's father, Michael Quinane.

I would like to thank Serg for finding the medal and returning to Pte John's family. - Not only did he return the medal, but apparently he had done a fantastic job of the cleaning the medal, which had probably been sitting in the salt water of Lake Beeac for around 80 years!